It’s easy and quick to accrue points. You still have a chance, so click here and escape to the Caribbean on a luxurious cruise with your partner.

With 1 day left until the start of the APT Macau, some of the Poker greats of the century are still left to arrive at The Galaxy Starworld Casino and Resort in Macau where the event will be held.

The APT Macau is the 2nd in the string of tournaments which will be held across Asia in 2008 and has attracted Poker gurus such as Johnny Chan (who inspired the movie ‘Rounders’), David Saab (the winner of the APT in Manila), Kenny Tran, Liz Lieu, and Todd Brunson (son of ‘the Godfather of Poker, Doyle Brunson) just to name a few. Michael Phelps, 8 time Olympic gold medalist in Beijing, also received an open invitation courtesy of the APT.

Stay tuned to www.yours4money.com for a daily update and pictures and profiles of the tournament participants.

Missed out on your big chance to rub elbows with the APT Macau Players? Not to worry, Betsson Poker is offering a free seat valued at $24,000 to the London Live £10 000 event. Join Europe’s and America’s Poker elite and test your skills against theirs as you both vie for the championship title. 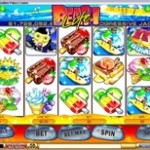 In May of 2007, Playtech launched its very popular Beach Life game, a 5-reel 20-payline Progressive Slots game with a tropical summer theme. Since then it has paid out some significant wins. The latest and largest win, which we were told occurred this week, is a jackpot totalling $4.2 Million!

At this time, we have not received the official word as to who the lucky Player is or at which Playtech casino he was playing. We do know that Playtech is preparing to release a formal statement with all the winning details and, once it’s out, we will give you the scoop.

In the meantime, our heartiest congratulations go out to the lucky winner whomever he/she may be. We’re sure that this jackpot win will be a life changing experience for him/her.

Just because the summer is almost over doesn’t mean that Playtech’s jackpots will be. Head over to Casino Del Rio for some Progressive Slots action worth $4.7 Million in total and good luck!

HOT SLOTS TIP: Bet the maximum number of coins when playing any Progressive Slot machines. This is the only way you will qualify to win a JACKPOT.

In the month of August alone, Ruby Fortune Casino has paid out in excess of $580,000 in winnings and the month isn’t over yet!!

What can you do with that kind of cash – take a much needed vacation? Pay for your kids’ college education? Start your own business? Go on a shopping spree? Whatever you decide, find your fortune at Ruby Fortune Casino, where you could be the next big winner!

Scott Henry!!!!!!!!! Let’s give a round of applause to Scott Henry folks. Mr. Henry has just walked away the winner of this year’s “Most Stupid Person Award”.

The 23 year old Devon resident was implicated in a robbery in which he and 2 accomplices stole a safe with over £6,000 from a resort nightclub. He was sentenced to 140 hours of unpaid community service for the crime. Instead of making good on what I consider a rather lenient sentence (I mean, some countries institute harsh punishments such as severing a limb for crimes of theft), Henry instead hopped on a plane to Las Vegas to participate in the World Series of Poker (WSOP).

When he did not report in for the work session, the probation board contacted his home, only to be told by his mother that he went to get a haircut before his Vegas trip. When he stood before Recorder Abbott for a breach of the community order work requirement, he was chastised as having no regard for the law and was further told that “if there was a sentence for stupidity you would be serving life imprisonment.”

Henry’s defense lawyer, explaining why he had made such a poor choice in judgement, said that gambling online had always intrigued Henry and he wanted to make his fortune by doing so. However, his plans of fame and fortune did nothing to his pocket and instead landed him a 3-month (all expense paid) trip in jail.

If flying to Vegas to play in the WSOP isn’t in your travelling schedule or within your budget, enjoy Texas Hold ‘Em and other exciting Poker games online at Titan Poker.

Lightning Bolt struck not once, not twice, but an astounding three times in Beijing capturing gold medals in the 100m, 200m, and Men’s 4x100m relay race (with fellow teammates Carter, Frater, and Powell).

He ran each race effortlessly; cruising to the victory line in times of 9.69 in the 100m on Saturday (shaving off .20 seconds from the previous World Record), 19.30 in the 200m on Wednesay (taking 0.66 seconds off the previous time), and tearing up the track in his portion of the 4x100m relay bringing Team Jamaica’s final time to 37.10 seconds, breaking a 16 year old World Record time.

Jamaica, an island paradise, is also sadly known for its high crime rate and gang violence. Nonetheless, Jamaica stood still to watch their hometown hero go 3 for 3 (3 events, 3 gold medals, and 3 World Records) in Beijing on Thursday night. Bolt celebrated jubilantly after his victories using his arms to mimick a lightning bolt and dancing a Jamaican jig. He is truly the fastest man in the World; the clocks don’t lie, folks.

When asked if he would participate in other events such as the long jump or the 4×400 relay, he responded that he is just happy with his gold medals at this point. But who knows? Maybe Lightning Bolt will strike 4 times in Beijing. And, if he does, you can be sure to catch all the Olympic betting action at Intertops.com.