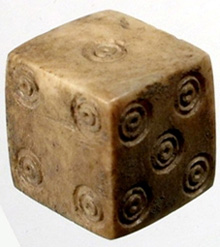 Gambling is one of mankind’s oldest pastimes. Archaeological evidence has uncovered 40,000 year old Astragali dice fashioned from bone as well as cave paintings depicting gambling as well as dice from the ancient days of Pompeii.

Relics of gambling activities have also been discovered in diverse cultures across the globe including prominent finds in Egypt, China, Rome and Greece. A game using tiles originated in China around 2300 B.C, Egyptian ivory dice were found in 1599 B.C and Greek soldiers played dice games in 1200 B.C in spite of the fact that gambling was outlawed in ancient Greece.

While illegal in Greece, Ancient Romans embraced gambling and Roman law even dictated that children be schooled in the art of gambling. Emperor Claudius ordered that his personal carriage be renovated in order to accommodate the throwing of dice and the insane emperor Caligula confiscated his troop’s property to pay off his gambling debts.

The 14th century King Henry VIII was an insatiable gambler who was eventually forced to prohibit gambling when it came to light that his legions spent more time gambling than perfecting their combat skills.

In the Americas natives believed that games of chance were a creation of the gods and as such wagered with dice fashioned from painted stones. In addition to gambling for entertainment purposes, these people also used dice to divine their future, cure ailments as well as to bring blessings upon their crops.

During the American Revolutionary War, the Continental armed forces funded lotteries. These gained in popularity over the decades and George Washington bought the first ticket in the District of Columbia’s first lottery which was held in 1793. As the years progressed every state in America joined in and the lottery became a popular fund raising system which is still in existence today in spite of a brief period when they were outlawed at the end of the Civil War.

The invention of riverboats in frontier towns led to the establishment of new venues for both legal and illicit gambling activities, while in the wild west gambling because a hazardous pursuit where many wagered more than just their money. In those days, the public also didn’t suffer hustlers and cheaters well and if caught these would be lynched out of town.

Legalities surrounding gambling re-emerged in 1910 when the state of Nevada outlawed gambling and with the advent of Prohibition in the 1920’s both gambling and drinking were forced to become underground activities until the 1930’s when regulations were slowly lifted as horse race betting was legalized.

In Nevada the gambling ban was lifted in 1931 and fast became the gambling capital of the world. Atlantic City followed in 1978 and many states and countries followed suite.

In the early 1990’s with the birth of the internet, online casinos evolved bringing with them a whole new way for modern cultures to enjoy their favourite pastime and the rest as they say is history.

While the morality and legality of gambling is still a great source of debate and is often viewed as a vice, it is a habit that is as old as time and possibly part of human nature – as history shows.