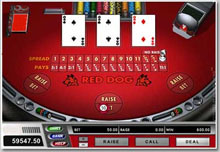 Like the game of blackjack, Red Dog is played on a table but it is more a game of chance than some other casino games. Seen as though it is more common to find the game at online casinos these days, we have focussed on how it is played in these.

Red Dog Poker uses a 52 card deck where cards have the same rankings/values as they do in poker, suits are irrelevant and aces are high. The game is all about the “distance” between two cards or the “spread” eg. The distance between 2 and 9 is 6.

The player begins by placing a bet of the desired value of casino chips. You do this by adjusting the total in the wager box of your casino console. You can increase or decrease the wagering amount by clicking on the “plus” or “minus” button.

Once you are happy with the bet total, press the “Deal” button and two cards will be drawn by the dealer and placed face up on the table.

Once the cards are dealt, A Red Dog (not always red, sometimes other colours (is then placed on the table indicating the spread or “distance” between the two cards the dealer has just drawn.

A pair hand is encountered when two cards of identical value are drawn (for example, two Queens). When this happens, the dealer will automatically draw a third card and if it is of the identical value as the other two, each player will win with a payoff of 11:1; if the value of the third card is different from the other two cards then the hand is declared a “push” and your original bet will be returned.

When consecutive value cards are drawn (for example, 3 and 4, or Queen and King) this is known as a consecutive hand. In this instance, the dealer will not draw a third card, the hand is declared a push and the player’s original bet is returned to them.

This is the most commonly drawn type of hand in the game of Red Dog and refers to the hand in which the dealer draws cards which do not have consecutive values. The dealer will announce the spread of the two cards and place the Red Dog on the table to indicate it. The spread can be understood as the values that fall between the values of the two cards drawn, for example, if the two cards drawn are 2 and Jack, the spread value is 8 because there are eight values between 2 and Jack (namely 3,4,5,6,7,8, 9,10).

Once the spread is announced and marked (by the Red Dog), players have the choice of raising their wagers in an increment equal to the amount of the original bet. This must be done before the dealer draws the third card. You don’t have to raise your bet and you can opt to “Stand” on your original by clicking the “stand” button on the casino dashboard. Once you have elected to either raise your bet or stand on the original, the third card is dealt.