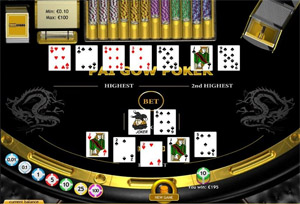 The rules of Pai Gow are fairly simple to learn and remember. Game play starts with the dealing of cards and both the dealer and the player receive seven cards respectively. The player must then use the seven cards to put together two poker hands – one consisting of 5 cards and the other of two cards.

The optimum two card hand is a pair of Aces, after which come the other pairs in order according to their ranks, followed by the high cards. In this game there are no two-card straights or flushes.

Five card hands are ranked the same way as in a traditional game of poker with the exception that Ace-Two-Three-Four-Five is referred to as an Ace high straight, and the only other hand that can beat it is the Ace-King-Queen-Jack-Ten straight.

In addition, the five card hand must always be stronger than the two card Pai Gow poker hand. For example, if you are dealt Ace of Spades – Ace of Club – Five of Diamonds – Six of Spades – King of Clubs – Jack of Hearts – Ten of Hearts then you will not be able to hold the two aces as your two card hand with the rest of the cards as your five card one. If you attempted to do this your hand would be considered dead and you would forfeit your entire wager regardless of what the dealer holds.

In the game of online Pai Gow poker, the Joker card is generally semi-wild and may be used to complete a straight or a flush, alternatively it can be used as an ace. The joker cannot however be used with a King to make a pair of Kings in your two-card hand.

The aim of the game is to win both the two and five card hands, if you lose both of your hands then you lose your entire bet, but if you win you’ll earn yourself even money but your win would be subject to a 5% commission, payable to the casino, which is how the house gains its advantage.

When playing Pai Gow at an online casino, if you’re unsure on how to arrange your cards, click on the “house way” button in the game’s console which is kind of like “auto play” in other casino games and the software will then arrange your hands according to basic game play strategy.

The dealer’s cards are generally configured in this way and while you may have chosen to arrange your cards differently, you generally can’t beat sound game play strategy.