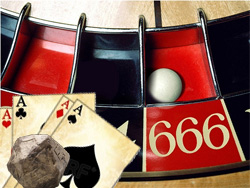 When you look beyond the façade of the glitz, glamour and modern day presentation of some of the most popular casino games you will discover that they have a dark rather disturbing history involving scandalous acts, death and reportedly even a deal with the devil himself.

This may sound rather amusing in a “gambling myth” kind of way but if you’re prepared to venture into the dark side of some of the most popular casino games, then we have a few shocking tales for you that may reveal that things aren’t always the way they seemed to you.

In casino games history the game of Roulette is said to be linked to Satan due to the fact that when the numbers on the roulette wheel (1 to 36) are added together they total 666 which, according to the Book of Revelation in the Bible is the mark of the beast and a number associated with the devil.

The story goes that Francois Blanc who was referred to as the “Magician of Monte Carlo” and his brother Louis relocated to the town of Bad Homburg in Germany with the purpose of transforming the small town into a gambling mecca. They started off by introducing a new and improved version of the traditional roulette wheel which had the house friendly 00 removed from it which lowered the house advantage to 2.70%. People loved the fact that they were offered better odds, even though the house edge was still at play and the new version of the game known as “European Roulette” became a hugely popular success.

Louis Blanc passed away in 1850 but his brother Francois continued to reap the benefits of their new game’s introduction and even took it Monte Carlo which led to the transformation of the city into one of the most lavish casino destinations the world over. But successful people come under a great deal of scrutiny and the folk of the day believed that Blanc had made a deal with the devil to learn the secrets of the game of roulette leading to untold riches. A fairytale or reality? You decide.

Baccarat is a game synonymous with prestige, intrigue and exclusivity, it has been made famous by movie characters like James Bond, making it the game of choice for the casinos elite clientele.

The early origins of the game however are anything but sophisticated and were more associated with life and death than fun with the earliest forms of the game being used by the ancient Etruscans in 900BC to decide the fate of young priestesses. Young virgins were forced to roll a 9 sided dice to divine whether or not they themselves were of the gods. Rolling an 8 or 9 meant that the virgin was favoured by the gods and worthy of the position of priestess. Rolling a 6 or 7 led to the young woman becoming a societal outcast forced to face the scary world of those times alone, while rolling a 5 or lower meant that she would be forced by the elders to walk out to sea and drown.

The odds of avoiding death in this sinister version of the game were a mere 45.44% which really meant that playing this form of the game was a losing proposition.

Poker is probably one of the most popular casino games thanks to events like the WSOP and the fact that it is one of the few games where there is no house edge and your skill dictates whether you win or lose. It has become a widely respected and sought after game with millions in prizes up for grabs.

In the past however, poker was looked down upon because it was played mostly by scoundrels and thieves, especially in 19th century America. While it was well received in the early 1800’s when French settlers brought the game to America, later it and gambling became the preferred pastime of less savoury characters and as such many towns banned gambling and kicked notorious gamblers out. Not to be put out these gamblers took the game to the riverboats and to the frontiers of the Wild West which attracted outlaws to the games meaning that arguments and even fights to the death took place.

The most legendary death that took place at a poker table was that of Wild Bill Hickok who was shot in the back of the head by a buffalo hunter called Jack McCall while playing the game. While versions of the story vary, it is largely believed that Hickok insulted McCall after taking all of his money in the game. Hickok was holding two pair with all black aces and eights at the time and remarkably to this day it is still known as the “Dead Man’s Hand“.

Gambling through the ages and the advent of casinos and casino games is definitely filled with rich and strange history and some rather ominous tales and events, but thankfully these seem to have remained in the days of old and today casinos and the games offered at them are great places to visit and play at.