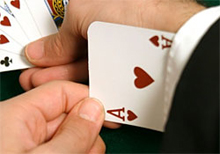 “Is it possible to cheat at Online Casinos?” This question comes up from time to time by people who do not necessarily want to cheat at an online casino but rather that are interested in whether or not this is possible and so we’ve decided to address the issue of whether a player can in fact cheat an online casino in this article.

Over the years there have been numerous attempts by less than scrupulous players to defraud and/or cheat at online casinos. If you ever encounter an online casino operator they will be able to tell you more than a few stories of players who tried and of course, failed.

More than a few hackers have attempted to access online casino’s remote gaming servers and in the infancy of the industry there was a story about a certain player who managed to hack in and manipulate the odds of certain casino games in their favour. Obviously this caused huge issues for the group concerned and steps were taken to tighten security. Today, online casinos have state of the art security and encryption and are always improving their anti-hacking and detection systems so issues like this have not arisen again in over a decade.

There are also players who attempt to cheat the casinos by seeking out weak casino bonuses where terms and conditions are not altogether clear or present loopholes which can be abused by players. While this still happens, online casinos generally present solid terms and conditions on their bonus and promotional offerings and if issues arise, work very quickly to rectify terms and conditions that cause issues, thus closing the door on bonus abuse.

Some players attempt to cheat by alleging that the online casino software has “cheated” them. They then take screenshots of a hand of cards, modify the image in Photoshop and send the screenshot in as proof that the software didn’t pick up their “win”. Online casinos are however able to check the same play check type systems that players have access to which record every game transaction and cross check these against other systems in order to verify each hand dealt, roll of the dice or spin of the slot, thus catching out any devious would be cheats.

Extremely tech savvy players have also employed blackjack strategy bots which play a perfect hand of blackjack on their behalf in an attempt to cheat. Online casinos however employ specialised algorithms to analyse game play patterns and if they pick up anomalies, even if you are using perfect game strategy, they reserve the right to retain any winnings and ban you from playing at the casino.

In short, there are many ways that players can attempt to cheat at online casinos, but with the level of technological advancement and security employed by reputable establishments like Europa Casino, their success is almost non-existent. For every attempted cheater, online casinos have measures to prevent fraud in any shape or form.

So if someone is promising you a sure way or system to cheat at online casino games, rather keep your money and don’t waste your time.

Online casinos offer a wide variety of traditional casino games from blackjack to craps as well as many modern variations of these like Caribbean Stud.

If you’re a seasoned player, playing these types of games repetitively can become a little boring. Casinos have recognised this fact and as such have added features like side bets which add more action and excitement to classic games. In general side bets can be made at a fraction of the wagering cost of normal bets in the main game. For example, blackjack tables may have minimum wagering requirements of $5, $25 or $50 per hand but you will also find that the side bet is available at $1.

You may be wondering why online casinos offer these types of bets and the reason is quite simple, the more action they can offer on their various games, the more players they will attract and the more money they will make. This is also why you’ll find much advice cautioning players against side bets, but that said, not all side bets are created equal and like with all betting options across games, some bets offer better odds than others!

Another advantage of the side bet is that because they are generally rather small bets they can help you to add a little excitement to your game when you’re getting bored without costing you too much if you lose.

Here we discuss a few frequently encountered side bets that you may consider next time you play online:

Side Bets in Craps

Craps is a game with a plethora of betting options so it may seem absurd that side bets would be added to this game, but occasionally they are. The most well-known and popular side bet is known as the Fire bet. In this bet players are paid if a shooter is able to hit four of more different points before losing the dice (by rolling a seven or crapping out before a point). Each point is unique, so if the shooter hits a 4 and has a 4 point on their next “come” roll and hits a 4 again, then this will only count as one point made. If you’re betting the standard $1, the following payout rates are applicable:

While these payouts may seem generous, always keep in mind that this game has a house advantage of over 20%.

Side Bets in Blackjack

When it comes to blackjack the most regularly encountered side bet is that of Super Sevens. This game is very simple to play and all you have to do to get in on the action is place a $1 chip on the designated Super Sevens spot. You will win this bet if you receive sevens in your next hand, beginning with the first card dealt.

Payouts generally are as follows:

The house advantage in this game is generally around 12% but may vary according to the rules and number of decks used in playing the game.

Side Bets in Let it Ride Poker

Occasionally you’ll find a Let it Ride poker table that allows a three card bonus bet. This type of bet is similar to the Pair plus bet in Three Card Poker games.

Players are paid according to the cards in the initial three card hand dealt and does not include the two community cards dealt by the dealer hereafter. Pay tables for this game are as follows:

When the above paytable applies the house advantage is generally in the region of 7% on this type of bet. For more information on this game and to find out when to Let it Ride while playing click here.

Ready to play? Find these side bet options and more at Spin Palace Online Casino now. 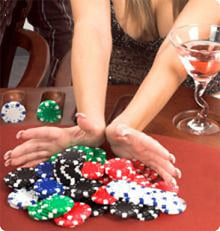 While old school Las Vegas casinos traditionally only accepted “small”” bets with the aim of slowly and steadily capturing player bankrolls, casino magnate and owner of the Horseshoe Casino, Benny Binion revolutionized Las Vegas casinos by allowing patrons first bet to be their only limit. This meant that if a player wanted to bet $100k on his or her first hand of blackjack that was acceptable but stakes could not be raised any further later in the game.

This novel approach to betting was something one seasoned gambler, William Bergstrom wanted to take advantage of. So in the mid 1980’s Bergstrom visited the Horseshoe casino armed with a suitcase filled with $777,000 and headed straight to the Craps table and bet every cent on the Don’t Pass Line. He won the bet and began what looked to be one of the most amazing hot streaks in history.

Bergstrom returned to the tables and later doubled a $590,000 bet, followed by further doubling a $190,000 wager and to top it off added another $90,000 to his casino wins. With so much cash added to his bankroll Bergstrom got caught in the age old trap and didn’t know when to stop.

The next day he returned to the Horseshoe Casino with one million dollars in cash, wagered it and lost. Tragically three months later he wagered his life and lost a game of Russian roulette.

Rags to Riches and back again

In the mid 90’s a down and out Las Vegas resident claimed his $400 social security cheque and headed to Treasure Island Casino.

According to those in the know, the man’s hygiene was less than savoury and nobody wanted to play at the same table as him, nevertheless without using even the slightest basic blackjack strategy he won $1 million. Instead of walking away the man of course continued to play and at the end of his day left Treasure Island $400 poorer.

Legendary poker player Johnny Moss met a man in a bar who claimed to have never lost a fight in his life. Moss’s friends decided to get in on a little impromptu action and bet Moss that he couldn’t knock the man out and even offered him 15 to 1 odds.

Being a gambling man, Moss couldn’t resist and ended up throwing a punch at the self-proclaimed fighting expert. Of course Moss lost the bet and even sustained broken bones and needed a trip to the hospital but didn’t regret his decision in the least, because as he stated “15 to 1 was too good to pass up“.

Putting it all on red or black

In 2004 Ashley Revell from the UK sold everything he owned from his car to his clothes, he also emptied out his entire bank account and poker bankroll. In total his life savings amounted to $136,000.

He then headed to Las Vegas and in a ceremonious event put it all on the line with a single spin at the Roulette table. With the spin of the wheel Ashley immediately placed his bet on red and seconds turned into days as he and the crowd around him waited with baited breath to see the outcome.

The Roulette ball landed on Red and Ashley went home to England with $272,000. Unlike other gamblers however, instead of gambling his winnings away as many had predicted, Ashley invested it in his very own poker site and hasn’t looked back

The largest novelty bet of all time

These days you can bet on almost everything from American Idol winners to when the human race will discover life on other planets. These types of novelty bets are often bizarre and definitely entertaining, but usually are long shots and very few professional gamblers win on novelty bets on a consistent basis.

There are however, always exceptions to the rule and in 1989 an unknown Welshman placed a £30 wager on a number of events that he believed would take place before the year 2000 at his local bookmaker. His predictions and the corresponding odds were as follows:

The odds on these bets all taking place were a whopping 6,479 to 1 and once the millennium was brought in the lucky Welshman claimed his £194,400 from his local Ladbrokes. This was the largest novelty bet and win of all time.

While Easter is traditionally a Christian religious holiday, it has been adopted by many people across the world who celebrate with Chocolate Easter Eggs, The Easter Bunny and Easter egg hunts.

With the Easter week-end upon us, if you’re looking for some holiday themed fun, there are a few Easter and chocolate themed slots available online, so check these out and enjoy!

This slot machine is packed with amazing Easter themed graphics including the Easter Bunny, baskets full of Easter eggs and more. This exciting online slot boasts a number of features including Free spins, Bonus Games and a Gamble feature. The jackpot tops out at a whopping 10,000 coins with betting limits ranging from $0.01 to $5.00 per line.

This is one definitely not to be missed this Easter, so play it today!

With coin sizes ranging from 0.01 to 0.20 credits it’s definitely a game that will suit every pocket and bring you loads of joy as you play, so check it out at Roxy Palace Online Casino now.