Golden Riviera is one of Microgaming’s oldest and most popular online casinos. After years of success the online casino was looking a little dated and so the team behind it put in a great deal of hard work and creative thinking in order to bring players a brand new and decidedly more refined look and feel as well as many added extras to enhance its already popular brand.

For those who don’t welcome change easily, you can still expect the same colour palate of rich blue and gold tones, but you’ll be pleasantly surprised by the updated, elegant appeal of the new graphics and user friendliness of the site which now offers enhanced navigation.

The aesthetics are not the only update in the rebranded casino; Golden Riviera has also updated their bonus offerings to include an array of exciting bonuses and promotions. In the place of the old 100% match bonus you will now find a $/£/€2500 and 60 minutes free play offer which requires no deposit and allocates you free credits to try out all of the over 600 games on offer at the casino. Should you then decide to deposit you will be eligible for the 3 tiered deposit bonus offer of up to $/£/€500 free (100% up to $/£/€150 on your first deposit, 25% up to $/£/€200 on your second deposit and 50% up to $/£/€150 on your third). That’s quite an improvement on the past offering!

According to Golden Riviera’s brand manager, Max Stern, the group couldn’t be more pleased at the outcome of the outcome of the recent update and believe that they have not only upheld their standards of refinement and player satisfaction but also upped the ante.

We tend to agree, so if you haven’t ever played at Golden Riviera Online Casino, there’s no better time than the present! Try it today! 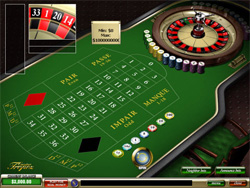 Progressive casino games are the most exciting to play due to the fact that at any second you may be the lucky winner of millions of dollars. In general, online slots are the most popular and frequently played games and as such they also produce the most millionaires, with other progressive casino games rarely producing big winners. There is however an exception to every rule and a recent win in excess of $2 million dollars paid out on a progressive online roulette variant at Casino Tropez.

On the 10th of March 2013, Casino Tropez paid out lucky winner Leonid (an alias) a whopping $2,034,464 when he hit the jackpot on the Playtech powered French Roulette progressive. Just prior to this massive win, the same game also paid out a generous €56,444 to Sylvia, a regular winner on the casino’s winners list.

Of all of the roulette game variations offered by Casino Tropez, namely European, French and American Roulette, French Roulette offers player the highest average return thanks in part to the La Partage rule as well as other special betting options within the game that make it a more competitive option with increased odds of winning than its European and American counterparts.

Other table games it seems have also been paying out at Casino Tropez this month with Scott winning $54,396 on the 10th and a massive $267,466 the very next day on the 11th of March at the craps tables.

The month is still young, so if you’re a table games fan you could just be the next lucky winner! Head on over to Casino Tropez for all of the action and more of the rewards now! 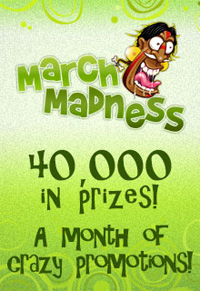 This month will see Platinum Playing giving away $40,000 in prizes with a month of crazy promotions wherein you will be afforded the opportunity to take part in a promotion every single day!

To be a part of the madness, all you have to do is login to your player account at the casino between the 4th and 31st of March 2013 and check out the daily promotional calendar to see what is in store, then simply follow the instructions and you’ll be on your way to hours of fun!

The $40,000 worth of giveaways include thousands of Free Spins on your favourite slots, Free entry into cash tournaments with $5,000 up for grabs in each one, as well as Rewards points which you can redeem for cash once you accumulate 5,000 points or more.

Platinum Play is part of the Fortune Lounge group of casinos, which in our recent promotional round-up made the top 3 list of online casinos who offer the best promotions on the net. With this kind of backing it’s not hard to see why it’s a great place to play! So for more ways to win, and enough action to keep you entertained every day in the month to come…visit Platinum Play Online Casino now!

Derived from the rule that enables a blackjack player to double his bet after seeing the dealer’s face up Card, Double Attack Blackjack has become a very popular game and while the majority of online casinos offer variants of this game, Playtech has recently released a version that is more entertaining and exciting than all of the others combined.

Playtech’s Double Attack Blackjack utilises eight Spanish decks (each consisting of 48 cards). For those who are not aware, Spanish Card decks contain no ten cards at all. Once you have placed your initial wager a single dealer card is dealt facing upwards in plain view. At this point, the player cards are not yet dealt and based on the dealer’s face up card; you have the option to place an added Double Attack bet up to the value of the initial wager. After you’ve made your choice on whether or not to place a Double Attack bet you first to cards will be dealt facing upwards while the dealer’s second card is dealt facing downwards and the game continues in the same way as standard Blackjack does.

Detailed rules of this game are available in the Help file in the Menu section of your player dashboard and it is advised that you read these before player but here are a few of the most important rules to keep in mind when playing Blackjack Double Attack:

As can be expected from game variations with changes in standard rules, payouts are also altered as follows:

Playtech’s Double Attack Blackjack also offers the very exciting Bust It side bet feature which is an optional bet but has to be placed at the beginning of each hand with the initial wager in the primary game. The Bust It Side Bet works as follows:

As you can see from the above, Playtech’s exciting version of Double Attack Blackjack is packed with action and possible rewards. So if you’re a blackjack fan in the mood for a change, why not play it at Europa Casino now!

To enhance your blackjack experience and improve your chances of making money when you play, check out our winning blackjack tips.