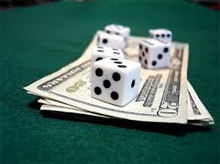 When you’ve been around the block a few times in the online casino industry you will read and hear words like “Money Management” and “Bankroll Management” being used quite a lot and often interchangeably, with the former being hailed as the save all, Holy Grail that will magically turn losses into wins. This unfortunately is not the case, and we’ve decided to give a brief explanation on the exact differences between these two terms and what it means for you as a player.

Money management is typically used to refer to the practice whereby a player attempts to earn money from any form of gambling whether they use a betting system or strategy to lower the house edge and ultimately beat the house. This is generally done by increasing your betting stakes when you’re winning and reducing them when you’re losing, but this is easier said than done because you there is no real way of predicting whether you will win or lose the next bet you make. It can definitely be a fun way to play, but it’s not going to be kind to your bankroll.

We all know that strategic game play can help a player to lower the house odds on certain games, but it never completely eliminates them and so you may get lucky and win but over the long term you will still ultimately lose, even if it is lesser amounts through strategic game play than if you were making poor bets.

On the other hand, Bankroll Management refers to how you allocate your money to certain games and bets, as well as throughout the duration of your casino visit. Bankroll management usually adopts the pattern of petting level stakes (or the same amount for every bet) whether you win or lose.

So in essence, Money Management systems or betting stakes will not change the odds of any game (no matter how much you may want to believe that they do) but good bankroll management will assist you in determining and controlling the amount of money that you are willing to risk and tailor your game play accordingly so that you get the most out of it with every casino visit. 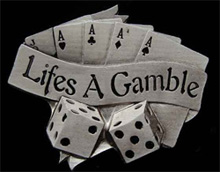 Most of us are acquainted with the world of casinos, online casinos, sportsbooks and poker room, and perhaps even the odd private bet, but what would you bet on and how far would you go to win if it really came down to it?

A quick search of the internet reveals some rather incredible and often bizarre stories of people who have bet on some pretty crazy things. Here we take a look at some of the weirdest wagers we’ve heard of:

Back in 2007 Russian native Andrei Karpov was down on his luck while playing poker against Sergey Brodov. After running out of cash, he decided that using his wife, Tatiana, as a wager would be a great idea. He lost the bet and Tatiana when she found out about it and divorced him. Ironically, she ended up marrying Sergey, the man who won her and is reportedly to be blissfully happy.

Generally if someone offered a man $100,000 to get breast implants, it would inspire incredulous laughter and most would dismiss it as pure insanity…But there is always the exception to the rule! Canadian, Brian Zembic is that exception. This crazy character won R100k when he bet that he get and keep breast implants for a full year in 1997. Fast forward and over decade later he still has them!

The reason for keeping the implants? According to Zembic, they have made him a great deal of money over the years due to media appearances and simply flashing them in public. He has also won other bizarre bets like one for $15,000 for living in a men’s restroom for an entire month.

Standing in the sea for 18 hours

Phil Hellmuth reportedly bet his friend, former World Series Champion, Huck Seed a whopping $50,000 that he couldn’t stand shoulder deep in the sea for 18 hours. Huck took the bet assuming that it wouldn’t be all that difficult…he was horribly wrong and lost the bet when he lasted only 3 hours.

Poker legend Doyle Brunson has lost pots of money betting on his own weight-loss, which never happened. Then in 2003 a group of gamblers offered 10:1 odds on a $100,000 stake that he would not be able to lose enough weight to weigh below 300lb. After years of failure they all figured it was a safe bet, but it wasn’t! Brunson finally found his willpower, lost the extra weight and won $1 million.

You’ve probably heard the famous story of Ashley Revell who sold literally everything he owned and travelled to Las Vegas, betting every cent which amounted to over $136,000 at the roulette tables on the 50/50 red or black bet. Luckily for him he won, doubling his money. He did not however try it again!

These are just a few of the many bizarre gambling tales from the past few years, we have no doubt there will be more to come in future because if we’ve learned anything from gambling throughout the ages, it’s that many people just can’t resist a good bet. 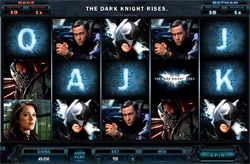 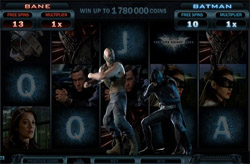