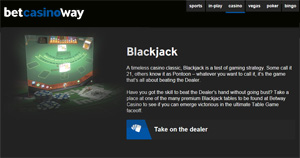 Despite being a game that doesn’t count much towards fulfilling casino bonus wagering requirements, Blackjack is one of the few casino games where you can significantly increase your odds of winning based on your skills and ability to play the game.

The majority of players start out by learning the rules of the game and then advancing to basic game play principles, but many never really advance much further than this due to the time and effort required to do so. As such, they never really advance past beginner levels and their bankrolls suffer as they continue to play the game at a basic level.

If however, you’re one of the few who want to up your game and start to win more than you lose when playing blackjack, we have a few tips that will help you to push past the mediocre and get you on the path to earning 99% plus payouts.

In order to do this you will need to be aware of the fact that each option you have during at game at any given time will have an associated average win or loss implication. You may imagine that surrendering your hand or doubling with a hard 20 against a dealer with an up card of six would payout at a low rate in comparison to standing, but the differences are not always as large as they seem. Likewise, knowing whether you should hit or double when you’re holding a soft total of 14 when the dealer is showing four will come down to very small margins.

The key to improving your game is to eliminate as many, if not all, of the mistakes that you make that have large margins and to also work toward eliminating mistakes that have smaller margins.

There are a few key areas to focus on in order to do this, the first is knowing exactly when to hit and stand if you are holding a total of 12 or higher and are up against weak dealer hands. Each of these situations will require that you learn the fine guidelines set out in blackjack strategy and follow them every time.

Another important area of interest that has small margins for error is when you are holding a soft total against a weak dealer hand because sometimes it will be more profitable to hit and at other times, doubling will be better. This scenario does come up quite often in the game so it’s important to know how to play each hand.

A single mistake will not send you spiralling into disaster, but making the same mistakes time after time will definitely affect your win rate and bankroll, so instead of wasting money, invest the time and learn to play skilfully so that you can see a return on your efforts. 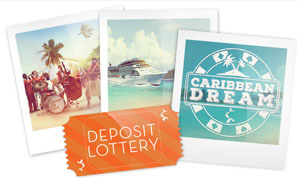 If you happen to live in the Northern Hemisphere you’ll know that winter is cold, long and dark, leaving most of us day dreaming about palm trees, white beaches and a Caribbean blue ocean. In keeping with their motto – “Betsson…a place where dreams come true” – Betsson Casino is offering players the opportunity to Win a dream Caribbean Cruise and up to €120,000!

So if you’re looking at turning your winter into summer, join the Betsson Casino deposit lottery and stand in line to win daily prizes and tickets aboard luxury Caribbean cruises. The full prize package includes the following:

Each week in the month of November, you will have 5 chances to win €1000 in cash and two opportunities to win tickets aboard an outstanding Caribbean cruise for two. At the end of the month, Betsson Casino will also be giving away €20,000 in cash prizes.

To take part in this amazing promotion, all you have to do is visit Betsson Casino to opt in. Then for every €10 you deposit and play on Betsson’s casino games, bingo, scratch or Live Casino, you will earn a single “lottery” ticket into the grand prize draw. The great things is that every ticket you earn will be added to every draw that takes place, so you have more chances to win than ever before!

Each day, Betsson’s winners table will be updated with a new winner by 18:00 CET and grand prize recipients will be published every Monday and Thursday through November.