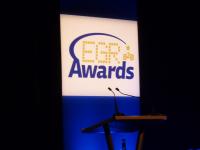 The eGR B2B awards for 2011 were recently held at the Chelsea Football Club in London.  The ceremony was hosted by ex-Sky Sports Presenter Richard Keys with an attendance of over 500 guests.  The black tie event is held annually to recognise achievements and innovations amongst the gambling and casino industry’s service providers over the past year and this year’s awards were shared by Microgaming, Playtech and Dragonfish, all with two awards with other winners receiving one.

Microgaming walked away with accolades for Poker Network of the Year as well as winning the “Innovation in slots” provision award, which according to judges, in a tough market speaks volumes about the quality and dedication to providing new exciting avenues of gaming to players that Microgaming has always offered, making it a stand out winner.  CEO of Microgaming Roger Raatgever stated that, “Innovation and independent thinking have been central to our growth since the company was founded over a decade ago and these awards recognise the ability of our team to keep our brand at the cutting edge of the eGaming sector.”

Playtech had its own share of winnings being named Bingo Network of the Year as well as the RNG casino supplier of the year award.

These awards go to show yet again that Microgaming and Playtech remain industry leaders and are definitely the companies to watch and play at going forward.  So why not try out Microgaming powered Spin Palace Casino or Playtech powered Europa Casino today.