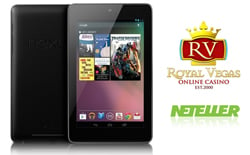 Recently Neteller has undertaken an aggressive marketing strategy teaming up with various online casinos to offer players an array of exciting promotions when they deposit at participating casinos via Neteller.

This month Neteller has announced yet another collaboration, this time joining forces with Royal Vegas Online Casino and offering entries into a lucky draw to win one of three Google Nexus 7 tablets. The promotion commenced on the 1st of September 2012 and will run until the 30th of November 2012. Winners will be announced during December.

In order to participate, all you have to do is deposit a minimum of $20 via Neteller at Royal Vegas Casino during the promotional period and you will automatically be entered into the Lucky draw, so the more deposits you make the more entries you’ll have in the draw and the greater your chances to win.

The Google Nexus 7 tablet is currently valued at $199. Powered by Android 4.1 Jelly Bean, the latest version of the world’s most popular mobile platform, Nexus 7 gives users easy access to over 4 million eBooks, thousands of movies and TV shows, limitless numbers of songs, and a huge selection of magazines. In addition there are over 600,000 apps and games available as well as the ability to fully customise features on the tablet.

If you are not familiar with Neteller, this is an alternative banking method to a credit card that is not only safe and secure but has also been in the market since the inception of the online casino industry. It is an e-wallet that can be funded by your credit card and you can withdraw your casino winnings directly to it.

Royal Vegas regularly teams up with Neteller to bring players additional promotions and beneficial offers, however it also has some great promotions of its own including the latest Fashion Like A Slots Star promotion which offers players the opportunity to win $30,000 in casino credits and $6,000 worth of branded fashion accessories throughout the month of September.