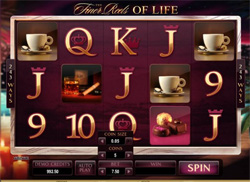 If you’re a fan of multi-player slots tournaments then you’ll be delighted to discover that Microgaming is continuing the ambitious trend that it started last year of releasing one new multi-player game each month and have just released the first game of 2014 entitled The Finer Reels of Life.

This game is a 5 reel, 243 ways to win video slot that transports you into the life of the rich and famous, offering a wild celebration feature as well as a multi-level Finer Features bonus round.

The latter is a four-tiered feature with multiple entries into subsequent levels, each with even more exciting ways to win. The ultimate quest is to reach the final tier known as Champagne and Diamonds presents you with 25 free spins with Microgaming’s trademarked Rolling Reels, which up the ante and the prize offer.

While the Finer Reels of Life video slot originally launched back in January of last year, the multi-player tournament format when live at Microgaming powered online casinos like Spin Palace last week. It is also scheduled to be the headliner for the €100K network tournament launching in March which has been aptly named “March to Riches” so watch this space for all of the promotional details.

According to spokesperson for Microgaming James Ford, The Finer Reels of Life tournament slot is just the first of many in of Microgaming’s stellar 2014 multiplayer tournament slots line-up and both Microgaming powered casinos and players at these brands have a great deal to look forward to in the year to come.