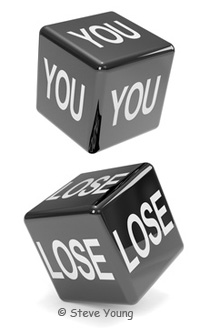 For most gamblers playing games of chance are not about securing a source of income, rather they enjoy risking a little of their money for the chance to achieve the dream of winning a life changing jackpot or top payouts at their favourite table game. The majority of people realize that winning life changing amounts are a long shot but still, the appeal of living the dream holds a strong attraction.

In order to minimize your losses when playing games of chance, you should avoid certain games because these can cost you far more than others do, and when the odds are stacked against you (as they are in gambling) you may as well give yourself a fighting chance.

Here we look at the games of chance that cost people the most money.

Not all casino games and bets are created equally, some are way more risky and expensive than others. Keno is one such game where the casino’s house edge can be as much as 29% which makes it a very expensive game to play and often costs players huge amounts of money when played at land based casinos. On the other hand though, playing Keno at online casinos is a better option due to the lower house edge of 5%.

Other games that you should approach with caution, whether online or at land based casinos are Wheel of Fortune, also known as Big Six where the house edge ranges from 11.11% to 24.07%. Bonus Six, a poker based card game with a house advantage of 10.42% to 23.83% and Sic Bo with a massive range of house edge ranging from 2.78% to 33.3% depending on the bets you place.

Even player friendly casino games have some bets that should be avoided because they have a larger house edge, for example the Baccarat Tie Bet (with a 14.3% house edge), the Craps “any seven” bet (16.67% house edge) and the Casino War tie bet (with a house edge of 18.65%) should all be avoided in order to avoid losing large amounts.

People automatically think of casino games when we mention games of chance wherein people lose the most money but the game that costs people the most money over the long term is more easily accessible and socially acceptable than either land based or online casino games and that is the lottery. This game of chance has the highest house advantage of any form of gambling because a standard $1 scratch card or lotto ticket holds a whopping 50% house edge.

If you think about it, this is an absolutely horrific bet and if playing in a casino, very few people would ever consider making a bet where they would only have potential to receive half of their money back. Yet, week after week people continue to play the lottery because in spite of the terrible odds and high house advantage, the promise of life changing, massive jackpot amounts. Scratch cards also remain hugely popular because of the satisfaction they provide players who love scratching off the cover to find out if they win. So it all really comes down to the psychology of gambling that prevails rather than good old common sense.

If the thought of playing games with insane house edges sickens you but you would still like the opportunity to win big jackpots, then you could consider playing slots. A number of players have won multi-million jackpots in the face of 5% to 12% house edges (online slots offer lower house edges so playing at online casinos is even better).

If you’re a scratch card fan then rather play online scratch card games as these are considerably different with a mere 5% to 10% house edge as opposed to 50% in their land based counterparts. You still get to scratch a block to uncover a prize (granted you use a mouse pointer instead of a coin) BUT it is still very satisfying.

And if you want to play games with the lowest possible house advantages look out for poker, video poker and blackjack games instead as you can master proper strategies to help you increase your odds of winning.

In doing so you will maximize your long term wins and avoid losing your hard earned money.