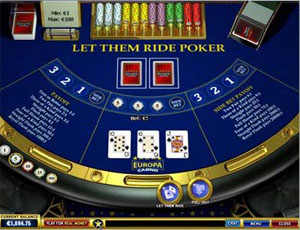 When compared to other casino games, the Let it Ride Poker variant is relatively new to casinos when compared with more traditional games like blackjack and roulette that enjoy a long casino history, being added to most game offerings in 1993. Since its addition it has enjoyed a rapid rise in popularity thanks to the fact that it is easy to learn yet remains a very interesting and highly entertaining game.

The game requires players to play against the house rather than other players or the dealer and you will be required to make two major decisions in order to be successful in this game. Here we’ll look at the correct way to play by deciding when you should “let it ride” by actually placing a wager and when you should sit out.

There are a number of scenarios to consider in this game, but let’s consider the simplest first – if you are holding four cards you should look to see if you can make any hand that is a pair of tens or better. If you do then you should always keep your bet on the table. Of course any four card flush draw is also a keeper that you should play as well as any open-ended straight draw. If however you don’t have at least a single card in your hand that is of a ten value or higher your wager will inevitably break even rather than earning you anything.

In scenarios where you have three cards you need to be more cautious when it comes to letting it ride as you’ll have fewer reasons to do so. Hands where you have a pair of tens are better are an obvious one to retain, as is a hand that has any three cards to make a Royal Flush and any three consecutive cards of three or higher.

For every gap you encounter in a three cards, straight-flush draw, you will require a single high card valued at 10 or better to justify playing the hand. This means that if you have a Ten, Nine and Seven of Spades, you should play it as your ten will make up for the gap, the same applies to a hand comprised of a Jack, Ten and Seven as there are two gaps but two high cards. A hand consisting of a Ten, Eight and Six or Jack, Eight and Seven however should not be played as there are two gaps and only one high card.

As you can see from the above, there are many scenarios where you should “Let it Ride” when playing this game and you will profit from these bets, but not all hands should be played in this way. Knowing the difference will have a significant impact on your bankroll and overall long term profitability.