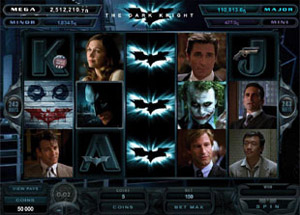 Be the next big winner!
Play Batman: The Dark Knight at Betway Casino

July has been a month for massive progressive jackpot wins at Playtech powered online casinos, with over £4 million being paid out in just one week – a feat that is simply unheard of. The first win was a massive £3.7 million which was won on the Beach Life Progressive slot, and the second win of £450,000 paid out just days later on the Chests of Plenty online slot.

Not to be outdone though, Microgaming powered online casino like Betway Casino are celebrating a milestone of their own, with their progressive jackpot prize pool passing the £/€/$8 million mark!

The software giant’s progressive jackpot pool (which at the time of publishing has exceeded the £/€/$8.2 million mark) runs across popular titles like Batman: The Dark Knight, Mega Moolah and Mega Moolah Isis, all of which are available for play at Microgaming powered online casinos like Betway.

Head of Casino at Microgaming, John Quinn commented that the company has been watching the Mega Progressive ticker growing rapidly over the last few months, adding that the anticipation is building and there is much speculation over when it will be triggered.

While most other providers apply maximum payout limits to their progressive jackpot payouts, when the Microgaming Mega jackpot is hit, the sum which will be life-changing for one very lucky player, will be paid out in a lump sum – a feature unique to Microgaming powered online casinos. The payout will also be made in the currency in which the player was playing in.

So if you’re feeling lucky, there has never been a better time to play one of Microgaming’s Mega progressives – you may just be their next multi-millionaire!