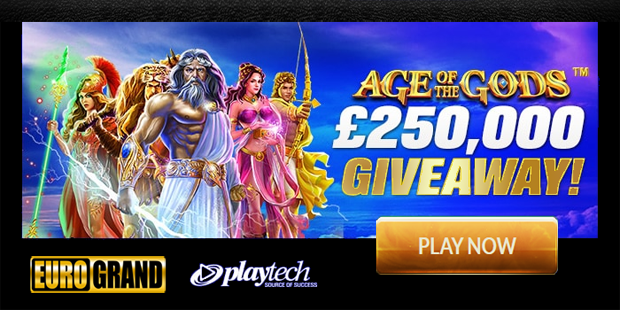 The Age of the Gods is upon us and Playtech has come up with a fantastic way to celebrate the launch of several of its new Age of Gods slots titles…a mega promotion with £250,000 in cash prizes to be won at Playtech powered online casinos like EuroGrand.

This is the largest online casino promotion that the software giant has ever run across its network spanning 21 days from the 20th of June until the 10th of July 2016. The prize money will be awarded through three independently adjudicated draws. The first two are valued at £75,000 with the final draw worth a massive £100,000! The top prize in each draw is valued at £5,000 and the rest of these incredible amounts will be divided into hundreds of smaller cash prizes so that you have more chance of winning!

To enter, all you have to do is deposit and wager £/€/$10 on selected Age of God slots titles including Age of the Gods, Age of the Gods: King of Olympus and Age of the Gods: Furious 4 in order to earn a ticket into the draw. The more you wager the more tickets you will earn and the greater your chances of walking away with a cash prize will be.

Each week you will also be given the chance to double your chances of winning by receiving two tickets for every time you spend £10 on the designated game as follows:

In addition to giving you the chance to win cash prizes in the promotional draws, these slots games are also linked to Playtech’s progressive jackpot network, which makes the wins you can achieve worthy of the gods.

The official prize draws for this promotion will take place on the 27th of June, 4th of July and 11th of July 2016 and you have to be in it to win it! Prize money will be credited to your account if you happen to be a lucky winner. What’s more is that you are eligible to win more than a single prize!

So if you’re in the mood for some epic action and the opportunity to win cash prizes while you’re at it, visit EuroGrand Casino now!